TVO Market Barometer 8-13: Is this market going up or down?

The major indices fell for the 2nd day in a row on Monday. Only Friday’s drop, however, fell in the distribution category, making it the first across the board distribution day we’ve had since June.

Although the session ended firmly in the red, the bearish folks on social media were not very impressed, as every intraday bounce was accompanied by flurries of posts claiming it’s all “algos” and the market is “rigged”. Well, if they’re only just figuring out now how the market is subject to price manipulation, it’s probably a good thing that their shiny new broker accounts (apparently) haven’t seen much use.

It was precisely the experience of price manipulation first hand that inspired our move towards total volume based trading back in 2014, with the premise that “price doesn’t matter.” 4 years (and over a +250% total account return) later, we’re still going strong and we’ve never looked back.

And you’d think that a healthy pullback would at least impress some traders out there. Turns out the apparent lack of a straight path up or down (as if markets ever move in a straight line) is making a few bulls a bit “uncomfortable” in going long at this point. FYI… Some of the best trades ever made with the TVO System started out as extremely uncomfortable. And on the other side of the coin, a strong gut feeling in favor of a trade can often lead to a sick stomach.

Last Friday, HG called for SIDEWAYS DOWN on Monday, and the forecast for Tuesday is for more of the same. In the long-term, though, TVO remains firmly in “healthy market” mode (and no, markets tend not to fall from the sky after just one distribution day). The “just like ’08” folks may want to go back and re-read a few books before making future predictions. 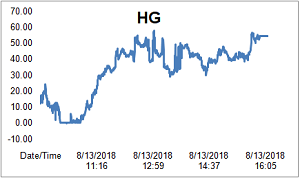 Sentiment: EAGER – Markets are in accumulation mode and big institutions are buying at a slow and steady pace.

Volume: -6% – Today’s volume was lower than the previous session.

Real Feel: SWELTERING – Bears were in control of the session with a slight trace of buying under the surface.

Cycle: OVERBOUGHT I – Retail investors are confident and slightly overweight in their holdings.

Portfolio: BUY – The market is healthy and it’s a good time to contribute to long-term investments.

Next Day Move: SIDEWAYS DOWN -Â The probability that SPY will close positive in the next session is 51%.

Want to read more? Join our list. It's free.

For the full rundown on today's active signals and options trades, please log in. Not a Member? Join us today.

To view past positions check out our Trade History.

To find out what the indicators mean, visit our Market Volume Volume Barometer.

To learn more about market volume and how we trade, find us on Twitter (@TradingLicks) and StockTwits!


The indicator descriptions in the above graphic represent general market sentiment. The actual TVO System signals and trades are listed below in the Members Area. To view, please Login. Not a Member? Join us.